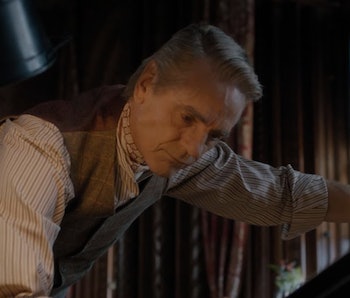 We all assume that in HBO’s Watchmen series, Jeremy Irons plays an older version of the original comic’s anti-villain Adrian Veidt, aka Ozymandias, but even the show’s costume designer has to admit that there’s something weird going on with the character.

In a conversation about costuming Watchmen characters, costume designer Meghan Kasperlik spoke coyly about Jeremy Irons’ role, which has been the go-to approach for everyone involved with the show. Since the early days of Watchmen’s promotion, the character’s true identity has been shrouded in mystery and misdirection.

“The character that Jeremy plays, his whole vibe is otherworldly,” Kasperlik tells Inverse, describing his style as uniquely flambuoyant when most costumes on the show look simple and homemade. He lives in an opulent castle and wears posh clothes, making the crime-ridden Tulsa look grimy by comparison.

Also Read: “The costumes on HBO’s Watchmen get something right the movie screwed up”

“The character that Jeremy plays” is exactly the type of purposefully vague language we’ve heard time and again — and it seems awfully suspicious.

During a New York Comic-Con panel, Irons was listed as “Probably Who You Think He Is.” In official episode summaries, he’s credited as “The Smartest Man In The World,” “Lord of The Manor,” or just “The Lord.” In the original Watchmen, Ozymandias was said to be the smartest man in the world, so we’re led to believe that Irons plays someone who both is and isn’t Ozymandias.

The term “otherworldly” sticks out when thinking of this character. Something weird is going on, and it has nothing to do with this man’s strange propensity to sit around his mansion in the nude.

In the original comics, Ozymandias was a regular, albeit brilliant human being who achieved peak human physical condition through meditation, diet, and intense training. His business ventures also made him incredibly wealthy, so he was already otherworldly decades before the start of the HBO series. (Assuming this is some version of the same character.)

“He doesn’t need to blend with anyone else — he’s his own distinct person,” Kasperlik said. “How can we make that into something a little bit extra? I approached it in looking at flashier materials that we could pump up the colors or age it down. There’s also a lot of mixed textures in his costumes.” Irons looks unlike any other character on the show, and his experiences sound like they happen in a world of their own as well.

Based on the plot descriptions for the first several episodes, the Lord’s servants Ms. Crookshanks and Mr. Phillips perform the play he wrote in Episode 1. Then he “receives a harshly worded letter and responds accordingly” before he “trains two new servants.” By Episode 5, he “plots a daring escape.” HBO’s “In the Weeks Ahead” trailer for Watchmen Season 1 show him building some kind of pod.

There’s an easy-to-miss detail from Episode 1 that seemingly confirms Ozymandias is dead, so either Irons’ Lord is some kind of robot with Veidt’s consciousness or Veidt’s consciousness is trapped in a dream reality. Either way, his costume will evolve as his circumstances become more dire.

“As the story continues on, he goes a little more disheveled or put-together depending on what’s happening in the storyline,” Kasperlik explained. “Most of his clothes are custom-made for these purposes.”

An alternate version of the newspaper article teased during Episode 1, which announces Veidt’s death, can be read in full on HBO.com as part of a strange website called “Peteypedia.” It clarifies that he was labeled “presumed deceased” by official authorities. Veidt disappeared in 2012 shortly after Trieu Industries acquired Veidt Enterprises. He hadn’t been seen in public since 2007, but most assumed he’d isolated himself at his Karnak compound in Antarctica.

There’s no body and no public knowledge of what really happened to him, so it certainly seems like Ozymandias somehow transported himself to some “otherworldly” place that he’ll spend all of Watchmen Season 1 trying to escape from. At least he’ll look good doing it every step of the way.

More like this
Entertainment
5.12.2022 10:00 AM
How Watchmen uses time travel to explore the sinister cycles of racism
By Chrishaun Baker
Entertainment
5.12.2022 3:00 PM
How Time Traveler's Wife became TV’s most intimate time-travel show
By Dais Johnston
Culture
5.19.2022 12:30 PM
Is The Staircase a true story? What the HBO show gets right and wrong
By Meg Walters
Share: