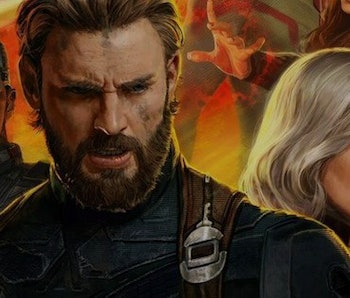 Marvel’s Infinity War is about to break out, but there are still lingering questions about the fallout from the MCU’s last conflict, Civil War, and we know surprisingly little about the upcoming adversary, Thanos. Some new action figures offer up some key intel about Captain America and Thanos.

The Toys R Us website recently added several Infinity War action figures to its roster, and the character bios that go along with some of the toys are brief but revealing. A Captain America action figure (complete with his new Wakandan shield) comes with a blurb that explains what Cap and some of his teammates have been doing since Civil War.

Since opposing the Sokovia Accords, the super-soldier has remained under the radar while continuing to do what he believes is right — saving the world one clandestine mission at a time.

The most recent Marvel movie, Black Panther, ended with a post-credits scene revealing Bucky Barnes’s whereabouts, but the film did not explain where Cap and his teammates were. Last we saw, they were all in Wakanda, but confirmation that he’s been doing secret missions explains why Steve Rogers wasn’t in the country during Killmonger’s coup. An official tie-in comic from January stated that Captain America, Falcon, and Black Widow are off hunting down terrorists who buy Chitauri weapons.

Thanos, meanwhile, is described as “a ruthless cosmic threat consumed with saving the universe from itself,” which would be a very different set of motivations than the cosmic big bad’s usual backstory. In the comics, Thanos is driven to conquer the universe because he is literally in love with Death — not the concept of death but Death personified. Sure, the MCU gave us Hela, the late goddess of death in Thor: Ragnarok, but those motivations seem a little too crazy for a tentpole Marvel movie.

Chances are Thanos isn’t actually a good guy out trying to literally save the universe and one-up the Guardians of the Galaxy, but his misguided efforts should make him a more interesting character.