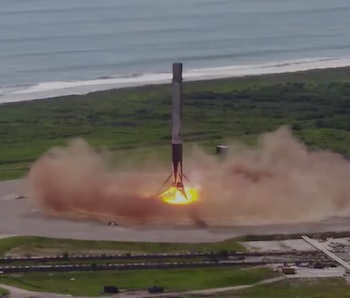 SpaceX released an impressive video on Friday of Falcon 9 rockets returning to Earth, to mark its achievement of 16 successful landings. The landings are a key step in Elon Musk’s plan to transform humanity into a multi-planetary species. If SpaceX can reuse rockets, instead of crashing them into the ground after a mission, it only needs to cover the cost of refueling to host another launch.

“You really have to get propulsive landing perfect,” Musk said at the annual International Astronautical Congress in Adelaide, Australia, on Friday.

The new rocket builds on the successes of the Falcon 9 project. It was less than two years ago, in December 2015, that the company wowed followers with the world’s first landing of a first stage rocket during an orbital launch. The ORBCOMM-2 Mission placed 11 satellites into low-Earth orbit for communications provider ORBCOMM.

In March, SpaceX took this feat to the next level, by reusing a rocket that was previously used to put a satellite into geostationary orbit.

This process is an integral part of SpaceX’s plan to host the first manned mission to Mars in 2024. During the mission, humans would set up a propellant production plant on the planet, where ice and carbon dioxide are combined to methane and liquid oxygen. This would then pump into the rockets to refuel and return to Earth, ready for another round trip. None of this would be remotely possible without the previous successes of the SpaceX team.

Watch the video below: