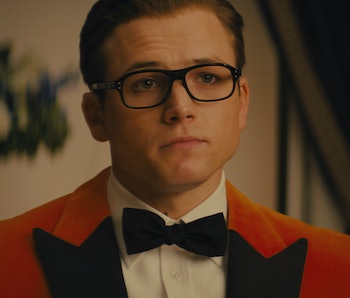 The Kingsman franchise isn’t particularly known for shying away from potentially controversial scenes or topics, even when they involve Presidents — especially only lightly fictionalized ones. But, director Matthew Vaughn thought including Donald Trump, who was originally intended to be referenced multiple times in Kingsman: The Golden Cirlce, would have hit too close to home for many viewers.

In an interview posted by Entertainment Weekly on Monday, Vaughn revealed that Kingsman: The Golden Circle originally included at least two references to Trump, and outlined what they entailed.

There was originally a scene where Poppy Adams, the villain of the film played by Julianne Moore, conveyed her wish to be the host of NBC’s The Apprentice — the reality show that Trump hosted for 14 seasons. Explaining why that line didn’t make the cut, Vaugh said:

We actually took out the Apprentice line because we felt it was too close to the bone. I think America’s going through a pretty interesting and rough ride at the moment and I wanted this movie to be escapism. And that means not suddenly have half the audience going, ‘That’s not cool, that’s not funny!’ as the other half is cheering.”

Because of this reasoning, Vaughn explained that the White House Oval Office, which was originally going to be extremely gaudy and decorated in gold a lá Trump Tower, was also overhauled:

We were making it in all gold and blinging it up. This was in May of 2016 and then I had an inkling. I remember saying to my American production designer, ‘Trump might win, you know? Would this be as funny if Trump won?’ And he was like, ‘Trump will never win.’ And I said, ‘You know what, I have a weird feeling he might. So let’s build a normal Oval Office and scrap the Trump version.’ I think my instinct was right. If you go too far — if movies get political when they’re meant to be fun — then it weighs everything down a bit too much.

Of course, Kingsman 2 didn’t end without some degree of president-related political commentary. In the film, Poppy has distributed drugs laced with a virus to people around the world through her business, and publicly announces that everyone will die if she isn’t given immunity and every drug is legalized. As a response, the President of the United States plans to pretend like he will comply with her demands, but actually is completely fine with letting a significant portion of the world’s population die, thereby “solving” the global drug problem and getting rid of evil people (those who take drugs).

So, while Vaughn clearly thinks (as he should) that there’s a place for politics in even “fun” films, he clearly meant that he didn’t want such an ever present real-world anxiety to be a potential stopping block to viewers simply enjoying the ridiculous high-octane action of Kingsman.

If Trump had been referenced in the movie, it would have been the second time the Kingsman film franchise stepped into controversial waters with the real-world President of the United States. In the finale to 2014’s Kingsman: The Secret Service, a man resembling then-U.S. president Barack Obama is one of the people whose head was blown up. Apparently, a repeat performance that could be seen as downplaying America’s volatile political and social climate was too much, even for a series like Kingsman.

Kingsman: The Golden Circle is in theaters now.