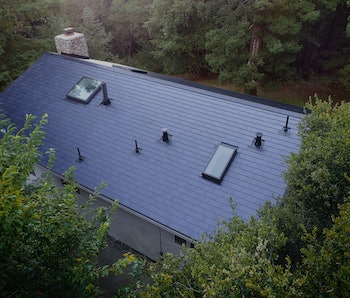 Elon Musk’s house runs on solar. The Tesla CEO made the announcement during Wednesday’s second quarter 2017 earnings call, where he revealed that both himself and Jeffrey B. Straubel, the company’s chief technology officer, have installed solar roof tiles on their houses.

“We have installed and working the Solar Roof tiles,” Musk told investors during the conference call.

The solar roof is offered at a competitive price point. Tesla has priced it at an average of $21.85 per square foot, bringing it down to below the cost of a normal roof.

Musk is one of the first to have the tiles up and running. When he first announced the tiles in October, he laid out a vision of a future house with a Tesla Model 3 in the garage, a Powerpack lithium-ion battery on the wall, and a roof made of solar tiles. The tiles would provide energy to the Powerpack, which would provide a steady stream of power to the car and house at all times of the day. With the Powerpack already available and Model 3 shipments starting last month, the tile was the last missing piece of his vision.

“I want to emphasize that there’s no Photoshopping on the roof,” Musk said. “That is actually how it looks, and it wasn’t taken by some… it was take some pics with your phone and send them over. That’s what we’re talking about here, not some special lighting conditions, pro-photographer situation. And this is version one, and I think this roof’s going to look really knockout, as we just keep iterating.”

When energy savings from the solar roof are factored in, the roof starts to pay for itself.

“Solar Roof is the most durable roof available, and the glass itself will come with a warranty for the lifetime of your house, or infinity, whichever comes first,” Tesla said in a May blog post.

Inverse Sweepstakes: Enter to win over $3,500 worth of Smart Home products.

Musk explained during the call that solar roof tile production should increase exponentially, in a similar fashion to Model 3 production. That means initial growth will be slow, followed by a sharp increase, and ending with a plateau, where Tesla produces a consistently high number of tiles per month. Even when production reaches its peak, though, it’s going to take a long time before every house has a solar roof.

“I think eventually almost all houses will have a solar roof,” Musk said during a May TED conference in Vancouver. “The thing to consider the timescale to be probably on the order of 40 for 50 years. On average, a roof is replaced every 20 to 25 years, but you don’t start replacing all roofs immediately, but eventually, if you were to fast forward to 15 years from now, it will be unusual to have a roof that doesn’t have solar.”

Beyond the tiles, Tesla’s solar operation has had big success recently. Last month, it was announced that Tesla will build the world’s largest battery in South Australia to solve the state’s energy woes. The 100 megawatt pack will store renewable energy for 30,000 homes. A storm last September left 1.7 million residents without power, and it’s hoping that Tesla’s solution will prevent a similar situation from occurring again.

In the future, these technological breakthroughs could transition the whole of the United States onto solar energy. Musk has laid out an ambitious plan that involves using rooftop solar panels, utility-sized power plants, and localized power infrastructure.

“If you wanted to power the entire United States with solar panels, it would take a fairly small corner of Nevada, or Texas, or Utah; you only need about 100 miles by 100 miles of solar panels to power the entire United States,” Musk said during his keynote conversation at the National Governors Association event in Rhode Island last month. “The batteries you need to store the energy, so you have 24/7 power, is 1 mile by 1 mile. One square-mile.”

The solar roof could be the first step toward a major shift in energy production.

More like this
Innovation
17 hours ago
A single color is reason enough to buy a Jaguar XF
By Jordan Golson
Innovation
7.2.2022 6:00 PM
Are self-driving cars safe? The tipping point rests on a psychological illusion
By Jean-François Bonnefon and The Reader
Innovation
7.1.2022 10:00 AM
Robots are ready to get touchy-feely
By Sarah Wells
Related Tags
Share: