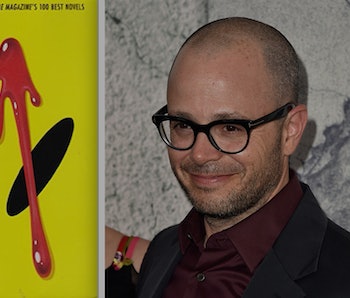 Damon Lindelof’s HBO Watchmen series might be in jeopardy. On Wednesday, the writer and producer told TV Line that he has not had any meetings with HBO about the project. “I hold the source material in such high regard. It would literally be the worst feeling in the world to screw it up … all I can say is I’m thinking about Watchmen a lot right now.”

Lindelof is a controversial figure in pop culture, thanks to the legacy of his first show Lost — so naturally when news initially broke that he’s developing a Watchmen TV show for HBO, not everyone was pleased. But if you only know Lindelof from Lost and his equally polarizing films like Prometheus and Tomorrowland, you’re sleeping on why he’s the best possible showrunner for a relevant and provocative Watchmen show right now.

Let’s get one fact out of the way: Lost doesn’t have a satisfying ending. You know it, Damon Lindelof knows it, Doctor Manhattan knows it — because he knows everything.

Many former Lost fans nurse grudges against Lindelof for the perception that he wasted their time, and that’s not unfounded. Even Lindelof admits the ending of Lost wasn’t satisfyingBut Lindelof might be that rare creator who learns from past mistakes. So, the notion that Lindelof can’t follow through on mysteries, go the full distance on philosophical musings, or end a story is outdated. The proof is in how solid his work is on The Leftovers.

Outside of proving he can end things well, Damon Lindelof and Watchmen is a uniquely fitting marriage of writer and material. Alan Moore’s Watchmen, first published in the late 1980’s, is a dark and gritty critique of the superhero genre. Zach Snyder’s film rendition — which it must be said has perfect casting, even as it’s an imperfect delivery — came out in 2009.

At the time, the Marvel Cinematic Universe hadn’t taken over the box office yet, as The Avengers didn’t assemble until 2012. Snyder’s own dominion over the DC Cinematic universe didn’t kick off with Man of Steel until 2013. Television shows like Arrow The Flash, Supergirl and Legion weren’t airing yet.

In short, the Watchmen movie was trying to critique a genre the world hadn’t been oversaturated with yet. It was the wrong time then — but it sure is the right time now.

The world of 2017 and beyond is one where the box office often seems to be nothing but superheroes. It’s an endless cycle of dudes having origin stories and trying to save the world, give or take some arbitrary costume changes. Even if you don’t regularly line up to see the latest superhero flick, it’s permeated your life on billboards and channel flipping.

Outside of the entertainment landscape, Watchmen’s themes of searching for meaning in a world where it’s fallen by the wayside also resonate more than ever with Trump in the White House. But although Watchmen is nihilistic, it won’t be devoid of hope. Both Lost and The Leftovers steamroll its characters through the worst scenarios, but they also give them moments of unexpected grace.

Lindelof is a whiz at character depth and nonlinear storytelling, which Watchmen requires. Before its ending, Lost wove a compelling world filled with rich, complicated characters. The Leftovers further built on that with outstandingly complex characters and wildly inventive episodes like Season 2’s “International Assassin” and Season 3’s “The Most Powerful Man in The World (And His Identical Twin Brother).” And for those concerned about Silk Spectre’s portrayal, Lindelof’s track record with putting women in his writer’s room is one of the soundest on television.

In short, forget your lingering Lost disappointment, because Lindelof and Watchmen are a perfect match — and it will hopefully come at exactly the right time. Here’s hoping Lindelof’s Watchmen gets the green light after all.