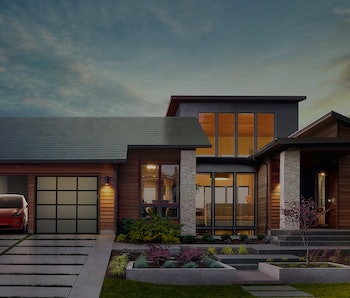 On Wednesday, Tesla opened up orders for its long-anticipated solar roof. On average, the Tesla solar roof price $21.85 per square foot, which is less than the cost of a normal roof, even without the energy savings.

The cost of a Tesla solar roof ultimately depends on how much energy you need and the percentage of active solar tiles on the roof itself. To help people determine that, Tesla also dropped a solar roof calculator with the release so people can estimate exactly the cost and how much money the roof will save them over time when they order. The solar roofs will be able to be installed in the United States this summer, and should ultimately pay for themselves, which Tesla points out makes them significantly more affordable than regular roofs. Along with that, the solar roof is stronger and lighter than a typical roof, which Elon Musk demonstrated on Instagram.

And although Elon Musk joked that he wasn’t going to make the warranty for the tiles infinity, it turns out that he changed his mind. “We offer the best warranty in the industry—the lifetime of your house, or infinity, whichever comes first,” a Tesla rep tells Inverse.

The Tesla solar roof is made of tempered glass, which makes them three times stronger than things like slate or asphalt tiles, according to Tesla. They are also half as heavy as other roofing methods. On an entire roof, the tiles will be a mix of non-active and active solar tiles. And while Consumer Reports found that a solar roof needs to be $24.50 per square foot to compete with other kinds of roofs, the Tesla solar roof comes in at $21.85 with 35 percent of the roof being active solar.

Determining the cost of a solar roof take into account how much of the roof can be active solar tile, and how much will just be the non-active glass tiles. A glass tile, without the solar elements costs $11 per square foot, and the solar tiles themselves are $42 per square foot. For most houses, Tesla says only about 40 percent of the roof will be active solar, but the percentage of active tiles depends on how much energy a household needs.

If you want to price your own roof, you can use the Tesla Solar Calculator to determine the amount of energy a solar roof will produce over 30 years, the flat cost to purchase a roof for your house, and even adjust the cost based on your electric bill.

Of the four tile options, the grey smooth and textured black glass tiles are open to order, and the slate and tuscan style tiles will be released early in 2018. Within the United States, Tesla plans to start installing the solar roofs right away, and will start installing outside of the US in early 2018. Tesla says that installation will take about five to seven days, entirely managed by the company itself.

With all of the solar roof announcements, Musk took a moment to upload another kind of recommendation for the solar tiles. He posted a video of a hail cannonball hitting a solar tile, leaving the solar tile entirely unscathed.