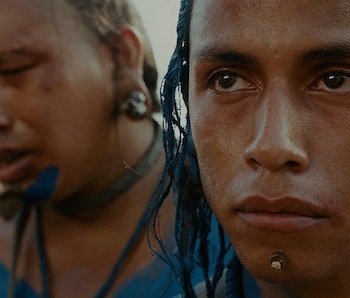 Mel Gibson was once a cinematic force to be reckoned with. He was introduced as the ruggedly charming Australian newcomer in George Miller’s original Mad Max film and then hit superstardom as the memorably insane expat in 1980s hits like Lethal Weapon and its sequels. He hit his creative apex with the 1995 historical epic Braveheart, which won him a Best Picture at the Oscars. At that moment Gibson was the biggest name in Hollywood … and then came the fall.

Gibson’s knack for anti-semitic hate speech eventually turned him into a pariah, and ten years after he hit bottom, he’s still somewhat lost in the wilderness. His new film, Hacksaw Ridge — about the first conscientious objector to win the Medal of Honor in World War II — is the latest in a long line of hopeful comebacks. It’s hard to separate the man from his art, but if critics are willing to give Hacksaw Ridge a fair shake, then they should also look back at his gloriously off-kilter previous directorial effort, 2006’s Apocalypto, deserves a second look.

In the film, a peaceful Mayan villager named Jaguar Paw (Rudy Youngblood), his pregnant wife Seven (Dalia Hernández), and their young son Turtles Run (Carlos Emilio Báez) briefly try to escape attack from a rival tribe; hiding in a cave works for a short time, but ultimately, Jaguar Paw is captured, enslaved, and taken to be sacrificed to the gods in a nearby city. Along the way he witnesses the endemic warfare and corruption that has overrun his ancient civilization, and battles to get back to his beloved family at any cost.

What makes Apocalypto truly great is its deceptively simple plot. Gibson’s film doesn’t worry about selling the sort of rewritten hagiography that marred Braveheart or committing the didactic lecturing of The Passion of the Christ. It’s more concerned with bolstering its straightforward nature with the universal theme of survival.

Co-screenwriter Farhad Safinia made clear as much when he said that he and Gibson “wanted to update the chase genre by, in fact, not updating it with technology or machinery but stripping it down to its most intense form, which is a man running for his life, and at the same time getting back to something that matters to him.”

But even with all its streamlined action, the movie never forgot to shade in vivid details that create a truly unique world on-screen. Appropriately enough, this sort of uncomplicated narrative structure with unique world-building aligns it most with another recent new action classic, Mad Max: Fury Road, whose there-and-back-again plot was a breath of fresh air amid the increasingly growing class of convoluted popcorn action movies.

On a purely cinematic adventure genre level, Apocalypto features some of the more breathtakingly tense sequences in modern memory. The scene in which Jaguar Paw and other captives are offered freedom if they can avoid being killed during a sadistic game of bow and arrow target practice is effortlessly energetic. Then, the macabre deus ex machina grandeur of the film’s centerpiece, when the captives are brought to the top of a step pyramid to be sacrificed, gives a contemporary cinematic twist to the beautiful excess of early cinema epics like Cecille B. DeMille’s Cleopatraand The Ten Commandments.

The movie still liberally futzes with the actual history of Mayan civilization — which caused its own minor controversy — as Gibson always seemed determined to put Jaguar Paw’s adventurous story above chronicling the real past. Beyond that, Apocalypto is notable simply because nothing like it has been mounted by a major Hollywood studio up to or since then. The only way a $40 million movie featuring a mostly unknown cast performing entirely in the Yucatec Maya language happened was because of the massive financial success of Gibson’s previous film, 2004’s The Passion of the Christ. It’s that very independence that led to Gibson’s undoing.

Months before Apocalypto hit theaters, Gibson went on his infamous anti-semitic tirade after being pulled over by Malibu police and handed a DUI, and his comments — including statements like “The Jews are responsible for all the wars in the world!” — rightfully disgusted people, who did not accept Gibson’s excuse that he had been drinking a bit too much that night.

Gibson dug himself deeper and deeper into controversies, and his reputation has never really been able to recover. Comeback material like The Beaver or winking appearances in films like The Expendables 3 or Machete Kills fizzled thanks to further legal trouble, such as what went down in 2010 when he was investigated for abuse and racist comments aimed towards his ex-girlfriend.

But it’s been a few years since Gibson did something truly awful, and Hacksaw Ridge isn’t some small cameo appearance. Gibson returns to the director’s seat for the first time in a decade, and people seem willing to take notice. While his World War II epic might not be what will ultimately get him in the culture’s good graces — it remains to be seen if that’s possible — it will at least remind people that he was capable of much better cinema than anyone gave him credit for, especially with Apocalypto.