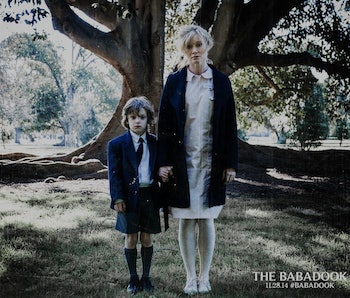 Halloween is approaching, as steadily as the masked killer who always gets the protagonist right when they think they’re finally safe. Whether you’re planning to go all-out on a costume or have a more mellow celebration planned, you’ll want your horror movie queue to be on point. If you haven’t had time to browse Netflix, no need to be afraid of the dark: We did it for you. From classics to indies, here are the best spooky movies currently streaming that will shock you, stun you, and make you recoil this Hallows’ Eve.

Sleeper hit The Babadook has been acclaimed as one of the better cult horror flicks in recent years, boasting a whopping 98% fresh rating on Rotten Tomatoes for good reason. This modern-day bogeyman tale about a children’s story that becomes all too real will change the way you regard “children’s” tales. What’s a good horror movie for if not to make you jumpy around seemingly innocuous things?

Nazi Zombies. Need we say more? It’s Norwegian too, so you can feel sophisticated watching a foreign film even if it does have an absurd premise.

Another Norwegian film (Scandanavians rock at the dark side of human nature) this found-footage film is a Blair Witch-esque tale features trolls instead of witches and 50% more fjords. Simultaneously spooky, funny, and original, it would give your Halloween the same amount of thrills with a unique spin.

Johnny Depp might have plummeted of late in both reputation and career choices, but Sleepy Hollow remains one of the last good Depp/Tim Burton collaborations (aside from Sweeny Todd, of course). Weird, magical, and batty, with Burton’s typical gloomy yet bright color palate, it’s the definitive update on the Sleepy Hollow tale. Forget that once-promising TV show and watch this movie instead.

The 2005 remake of the 1979 classic doesn’t have the best rep — not least because it stars an unlikely horror leading man in the form of Ryan Reynolds. But it’s not nearly as tepid as its reviews suggest. It delivers genuine thrills, and controversial opinion or not, we’re going to say it: It’s one of the best performances of Reynolds’s career; filled with intensity and unexpected depth. Might we suggest a sequel featuring Deadpool?

A fairly standard horror film, The Uninvited is a jumble of horror tropes: A naive heroine recently released from an asylum, an evil stepmother character (or at least father’s girlfriend); an unreliable narrator with a jumbled memory. It’s nonetheless worth watching for it’s eerie circular plot and a strong performance from the consistently underrated Emily Browning.

2. Children of the Corn

Any horror movie you have seen featuring creepy children (The Ring), creepy small towns (Silent Hill), or a bickering couple entering a creepy space (Vacancy) is a derivative of Children of the Corn. It naturally began as a Stephen King story and subsequently became a film franchise longer than The Land Before Time. Take in the original while you can on Netflix. As a bonus, it’s also got one of its nine follow-ups (Children of the Corn: Genesis).

Netflix currently has Jaws 1, 2, 3 and Jaws: The Revenge. Your Halloween night is just begging to be spent in a marathon with a terrifying Great White. For all four of these movies, you’re gonna need a bigger boat.

And if horror isn’t your cup of tea but you’re still looking to get into the spirit, go check out a horror-comedy.