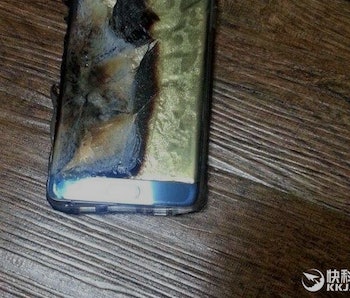 Samsung delayed the release of its Note 7 smartphone today, following reports that some devices have exploded when they were plugged in to charge their batteries.

“Shipments of the Galaxy Note 7 are being delayed due to additional tests being conducted for product quality,” the company told Reuters earlier today. The company didn’t say what those tests are for, but there’s a good chance it has something to do with reports that the flagship smartphone is prone to, well, exploding.

A South Korean man published photos of one such blackened and burnt device. The Note 7 is already available to the public in South Korea; it was originally supposed to debut elsewhere in September, but this issue will delay that worldwide debut for at least a little while. Here’s a photo of one of the devices, courtesy of My Drivers:

This doesn’t appear to be a scenario where someone blew up a smartphone for the hell of it. It’s a real problem, and considering how often people have to charge their smartphones, Samsung has probably made the right decision by keeping the Note 7 off of store shelves.

Forget the bendable phones Samsung plans to introduce in 2017 — how about a smartphone that doesn’t explode when it’s being charged? That seems much more useful, and much less dangerous to the smartphone-buying public, in the grand scheme of things.

At least nobody was using the Galaxy Note 7’s iris-scanning feature when the device blew up. That would’ve been a grisly story.

More like this
Innovation
5.24.2022 1:33 PM
50 years ago, the U.S. and U.S.S.R. joined forces to ensure astronauts could survive in space
By Allie Hutchison
Innovation
5.23.2022 9:00 PM
How a genetically-engineered tomato could help solve a global health crisis
By Claire Cameron
Innovation
5.21.2022 2:30 PM
46 years ago, one video game innovation modernized the industry — and traumatized a generation of gamers
By Zack Kotzer
Share: