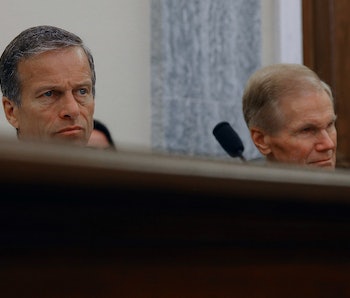 South Dakota Senator John Thune penned the letter. “If true,” he wrote, “these allegations compromise Facebook’s ‘open culture’ and mission to ‘make the world more open and connected.’” In addition, Thune continues, if these allegations are true, then “Facebook’s assertion that it maintains a ‘platform for people and perspectives from across the political spectrum’ misleads the public.”

Thune went on to ask Zuckerberg five pertinent questions, which all seek more information on what Facebook’s policies were and whether they indeed manipulated the social network’s Trending news section. The questions are as follows:

1) Please describe Facebook’s organization structure for the Trending Topics feature, and the steps for determining included topics. Who is ultimately responsible for approving its content?

2) Have Facebook news curators in fact manipulated the content of the Trending Topics section, either by targeting news stories related to conservative views for exclusion or by injecting non-trending content?

3) What steps is Facebook taking to investigate claims of politically motivated manipulation of news stories in the Trending Topics section? If such claims are substantiated, what steps will Facebook take to hold the responsible individuals accountable?

4) In a statement responding to the allegations, Facebook has claimed to have ‘rigorous guidelines in place for the review team’ to prevent ‘the suppression of political perspectives’ or the ‘prioritization of one viewpoint over another or one news outlet over another.’

b. Please provide a copy of these guidelines, as well as any changes or amendments since January 2014.

c. Does Facebook provide training for its employees related to these guidelines? If so, describe what the training consists of, as well as its frequency.

d. How does Facebook determine compliance with these guidelines? Does it conduct audits? If so, how often? What steps are taken when a violation occurs?

b. Please provide a list of all news stories removed from or injected into the Trending Topics section since January 2014.

Despite the fact that Facebook did indeed mislead its users — there was no indication that the Trending Topics section was anything but an unbiased algorithm reporting on actually trending topics — it’s well within Facebook’s rights, as a private company, to so editorialize. We’re accustomed to so-called news outlets — TV channels — reporting hand-picked, biasing stories, but we have come to expect that these outlets function in this way. The thought that Facebook, which purports to be a neutral social network, engages in similar behavior offends innocent ears — especially if those ears are conservatively tuned.

The letter, which can be read in full below, concludes with a politely-worded demand that Mark Zuckerberg respond “no later than May 24, 2016.”

More like this
Innovation
10 hours ago
Can cars run on water? The science of a TikTok conspiracy theory, explained
By Andrew Moseman
Innovation
6.27.2022 8:00 PM
Artificial photosynthesis can grow plants without light — and may solve a planetary dilemma
By Steph Lee
Innovation
6.25.2022 10:00 AM
9 veggies that are healthier cooked than raw
By Laura Brown and The Conversation
Related Tags
Share: