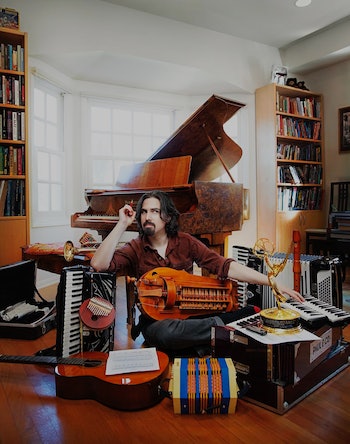 Bear McCreary is an Emmy-winning composer, best known for his work on Black Sails, The Walking Dead, Outlander, Battlestar Galactica, Agents of Shield, and 10 Cloverfield Lane. His music is utterly unique: Haunting, beautiful, and always unexpected. McCreary could set a score to teeth brushing and the scene would still be dramatic and moving.

McCreary spoke to Inverse about why Black Sails has the weirdest score he’s ever done, how he composed the Outlander theme before the show existed, and more.

What’s your process like for composing an opening title? Do showrunners typically give you much instruction, or do they just let you go?

Every experience is different. I do find, generally speaking, that I’ve had a lot of creative freedom to come up with opening titles. Honestly, they are in such a creative vacuum early on. I’m usually hired at a point when the main title graphics haven’t been finalized — sometimes the show hasn’t even shot yet — and there are a lot of more important things to worry about. The main title is obviously very important, but at that given moment, they’re shooting the pilot or rewriting episode two, or they’re on their first day on set. There’s a lot up in the air. Often, I get to take a gut-instinct stab in the dark and see what comes out. For example, on Outlander, it was almost decided in advance.

I was talking with [showrunner Ron Moore]. He said he was doing Outlander, and I started talking about how much I love music from the Jacobite rising. I grew up listening to this stuff. I said, “check this out, I did this solo recording of the Skye Boat Song, which is my favorite song.” He heard it and said, “That’s beautiful! I think that’s our main title piece.” Then the first thing I thought was, “Well, I’m scoring Outlander now!” Obviously we made a lot of decisions together afterwards, like whether or not it would have vocals. That’s where I really got to put my stamp on it.

And what about Black Sails? That’s one of the most unique opening title sequences on TV.

That’s the weirdest main title I’ve ever written. That one, I can definitely take a certain amount of credit, but also [showrunner] Jon Steinberg was really involved in that. He was the defining force in that title sequence, which is a big connection between the music and the visuals.

I was talking with the main title design company, and they were starting to line up some hits. I said, “those images are really brittle, maybe I’m going to make it more emotional.” Steinberg put a stop to it. He said, “What are you guys doing? I don’t want to images and the sound to line up. I don’t want anything fragile or delicate in the score.” He wanted a counterpoint between an incredibly aggressive, rustic, raw, shanty inspired heavy metal piece and then slow tracking shots against delicate carvings. What a bizarre idea!

Even I thought, “Is that going to work?” Once we put it together, it really did. It was an incredible experience.

Since most of your shows are period pieces, do you conduct a lot of research?

I always do research, even when I am familiar with the period. These shows that I’ve done for Starz have more research time than anything else I’ve ever done. When I did Da Vinci’s Demons, I learned so much. When I did Black Sails, I recorded thousands of hours of sea shanties and studied the period’s instruments and applied that to the score.

With Outlander, I knew a lot about the music of the uprising, but nevertheless I spent a long time doing research and made sure that I understood what the instrumentation was. Especially in Season 2, wow! I knew nothing about Baroque French music of the 1740s, and I’m quite the expert in that now. That’s the fun part about working on shows like that. I have to learn something new in order to do a good job.

Is there any show that surprised you in how fun it was to score?

There have been a lot of surprises over the years. Outlander wasn’t a surprise because when I started that show, I thought, “This is the chance for me to use this music that’s been pent up inside me for years. I’m going to write bagpipe solos and Scottish music. This is going to be an amazing experience.” And it was. I would not file that as a surprise, just because my expectations were very high.

Black Sails was a real surprise. I had been talking to Steinberg about that show for years. He’d always mentioned that he had this pirate thing kicking around. When he finally got going, he was trying to figure out what it was going to sound like. I think I even surprised myself. I can’t give credit enough to Jon for pushing me out of my comfort zone. He really wanted something unusual and did not want it to sound like Johnny Depp, so I started with extreme historical accuracy.

The first thing I did was eliminate all of the big blockbuster sounds and we completely took off the table anything orchestral. Then I started with instruments that would have been small enough to carry on a boat: accordion, guitar, bodhrán. Gradually, the characters and score came to life. It really was the inclusion of the hurdy-gurdy and a bunch of other strange instruments. When I pulled that for Jon, he went, “Wow, what’s that sound?” and I knew we had found something.

To this day, whenever I watch an episode of the show I think, “The music is so weird!” It’s the weirdest score I’ve ever done and I’m still amazed that it is something on a network, yet it works so well in the language of that show.

And now that Season 3 is well underway, is there any sequence you’re particularly proud of?

I got to do a whole bunch of new sounds. Basically any scene with Blackbeard is something where I got to explore. I brought in a baroque cello and a viola, which have very deep, resonate sounds. It’s very longing but also masculine. It’s something that really stands out for me.

The most exciting experience of Season 3 was getting to work with Carmen Twillie. Most people would recognize her as the African singing in The Lion King. I brought her to studio to be a solo voice in a score that, up until this point, never had a solo voice. When I think of Season 3, I think of her and how she brought in all kinds of things like a lullaby from Ghana, some other longing pieces that just took the score to a totally different place. That was a really amazing experience.

Most of your shows are period piece epics, fantasy, or sci-fi. Is that based on personal choice?

I love fantasy, sci-fi, and horror and I love period pieces. I have all gratitude to Starz for allowing me to do that. Da Vinci’s Demons was really the first time I got to write music for a period and really had to research something in the past.

Then with Black Sails I did it again and Outlander I got to do it again. It’s become something that I really enjoy. At the same time, there’s typecasting. If you’re working on a medical drama and you have your choice of 10 composers, why would you hire the Walking Dead, Outlander, Battlestar guy? I get it. It’s definitely the kind of call I get, but it’s also the kind of thing I like doing. So I’m happy.

Do you find it difficult to switch gears between period pieces like Black Sails and Outlander and your more contemporary shows like The Walking Dead?

I actually find that switching gears is what keeps me creatively energized. I like to dive into a project for a short amount of time, express myself, and then jump into something else and get into that word. The Walking Dead is definitely more of a contemporary sound — but in a way it’s also a period period. There’s a lot of guitar and pianos and all the sounds have been manipulated and distorted and destroyed for the score. There’s also a contemporary emphasis that is very different.

I really find it inspiring to change gears. It keeps me excited. I’m definitely never bored.